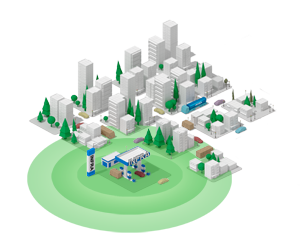 INFRA is pleased to provide support a project for the development of the Novel Plasma Catalysis Reformer of CO2 for Power to Jet Fuel and Energy Storage. INFRA will assist in the simulation and development of a Techno-Economic Assessment for INFRA’s proprietary Fischer-Tropsch module to be integrated with the plasma reforming process.

The technical objectives of the project include establishment of the carbon life cycle basis for commercialization of alternative jet fuel production using plasma catalysis reforming and Fischer-Tropsch process with up to 90 % reduction in carbon emissions as compared to fossil-based fuel.

There is significant demand for low carbon intensity jet fuel, and Fischer-Tropsch synthesis is an approved pathway. The current supply of alternative jet fuel is approximately 5 million gallons per year and is forecast to rise to 120 million gallons by 2025.

When the project is successful, the environmental and economic impact is billions of gallons of displaced conventional jet fuel: for every billion gallons displaced, a potential ten million tons of CO2 emissions can be reduced.