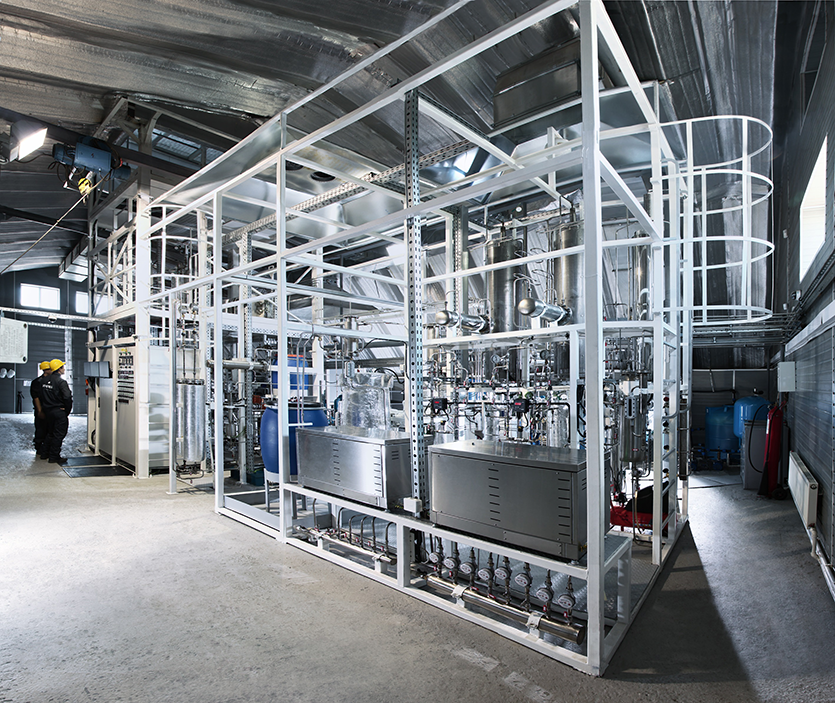 Having been fully developed in the lab, the company's technology was tested on a larger scale.

In 2010, INFRA built a compact Pilot Plant for conversion of natural gas into synthetic oil. The plant modeled the full cycle of the GTL chemical process including the intake of pipeline gas, sulfur removal, steam methane reforming, syngas conditioning, and Fischer-Tropsch synthesis.

The pilot plant allowed for testing Fischer-Tropsch process in different single-tube and multi-tube reactors. Tube length varied from 1,500 to 3,000 mm.

In 2013 the first pilot plant was acquired by VNIIGAZ Gazprom LLC.

In 2014 INFRA commissioned and continually operated on a continuous basis the new, larger scale full cycle pilot plant. It represents the second generation of INFRA’s testing facility and is differentiated by a high degree of automation and extensive data gathering system. The unit is capable of operating several reactors, including lab-scale test reactors for endurance tests, simultaneously.

Both plants were designed, manufactured, and assembled in-house by INFRA's engineering and production group.

The plant is the main testing facility for further development of new Fischer-Tropsch catalysts. In particular, it will be used to develop enhanced catalysts, which will produce synthetic oil with higher content of diesel or kerosene fraction.

The unit can be adapted to different single-tube and multi-tube reactors of up to 6000 mm in height, intended for use in INFRA’s industrial-scale GTL plants.

Pilot Plant re-adjustments for different reactor sizes and different layouts allow to achieve unit capacity up to 0.5 barrels per day.

The pilot operations have confirmed the process productivity in excess of 300 kg per one cubic meter per hour and produced samples of liquid hydrocarbons for commercial testing.

Several uninterrupted runs in excess of 2,000 hours each showed excellent performance and lack of degradation of the proprietary Fischer-Tropsch catalyst.